From Index Cards to Prototypes 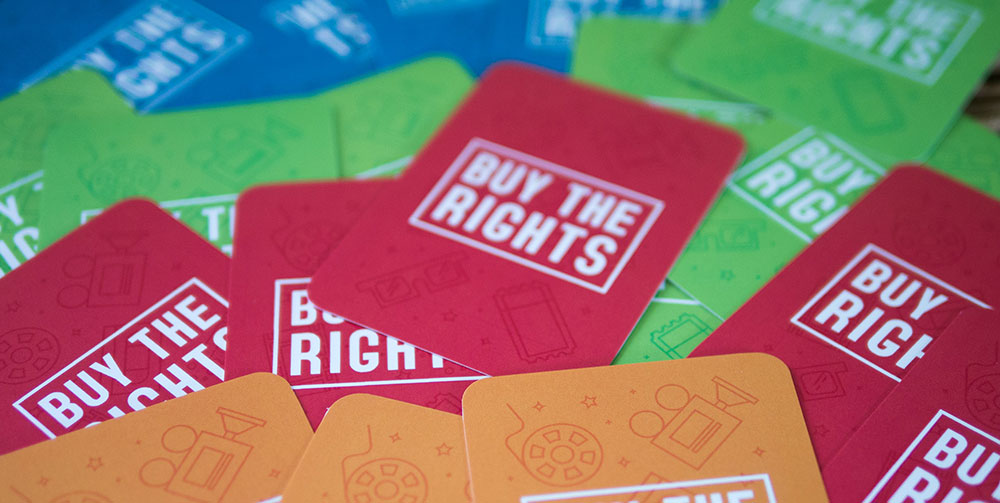 Buy The Rights started as an idea last year, but I didn’t do anything with it until a few weeks ago. I had a few Google Drive spreadsheets created for card ideas but it wasn’t until I told some friends about the idea and got some encouragement that I actively started developing the game.

The wife and I had a game night planned with our friends and knew that would be the perfect opportunity to have our first mini playtest, so we quickly made up an ugly prototype using index cards, a label printer, and play money from an education supply store. 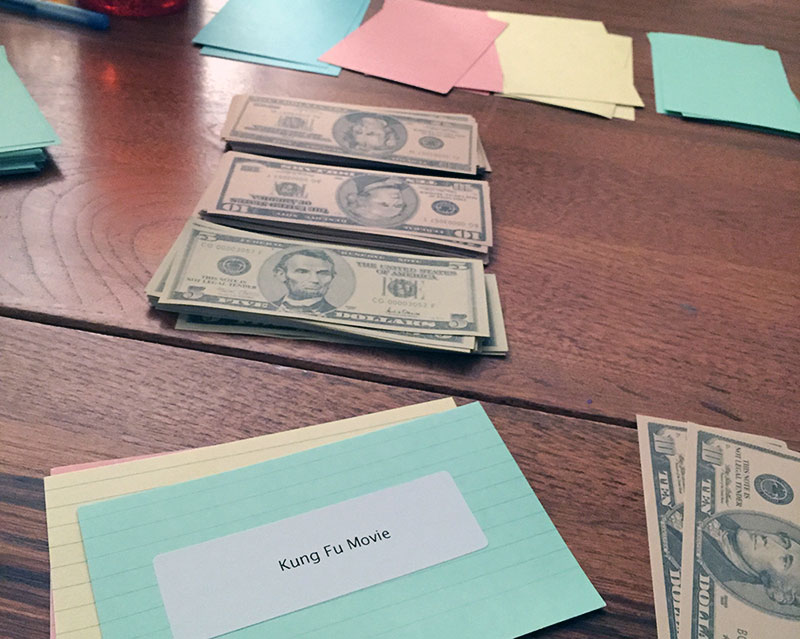 It was a crude version of the game, and only had 20 cards in each deck (as opposed to 100 for the full game) but it went surprisingly well. We had a blast, cracked up at a few hilarious movie ideas, and I knew I needed to try and get the game done and on Kickstarter. My favorite movies from that night were:

Since I already had the mechanics down, I knew one of the first things I would need is art.

I knew of Jason Smith from following him online for a year or so, and I loved his style of illustration. He is great at creating icons and that’s something I knew I wanted to go for with Buy The Rights. I contacted him and he was interested, so I got him started on card designs. I know with this game I’m fortunate that it doesn’t require a lot of different design and illustration, and that would let me keep the pre-Kickstarter cost down to an affordable level.

It took a couple weeks for Jason to come up with the art for the game, and my excitement level went through the roof. Suddenly it looked like a real product instead of a thrown-together game on index cards. The same night I received the final art from Jason, I threw together PDFs to send to Print Play Games so I could get my hands on some more legit looking cards, and paid a little extra to get them a couple days later.

Even though the prototype cards are obviously not retail-quality, they’re way better than anything I could have ever made myself.

The Next Next Steps

I went with PrintPlay over The Game Crafter because I’ve been working with AdMagic on getting quotes for the actual production of the game, and they own PrintPlay. I went with the dull card setting, but for a few cents extra they offer linen cards. I think the next version of the prototype will go with that option. Today I put in an order for a printed box so the game can look a little better, and hopefully that will encourage me to try Buy The Rights out at some local game stores.

Currently I’m trying to finish the rest of the cards so I can get a complete prototype and start doing some serious playtesting. I still need the art for the play money and box finalized, but that shouldn’t take too long. My goal is to have a complete prototype in the next couple weeks so I can spend most of May testing and preparing for the Kickstarter campaign.

I’ll definitely chart the game’s progress here on the blog though. It’s been an interesting journey already!